1897 was an interesting year in Boggy Creek in East Gippsland. The township changed its name to Bullumwaal, a “Monster Bizarre” community fundraiser was held and an amazing stage curtain appeared at the Bullumwaal Mechanics Hall 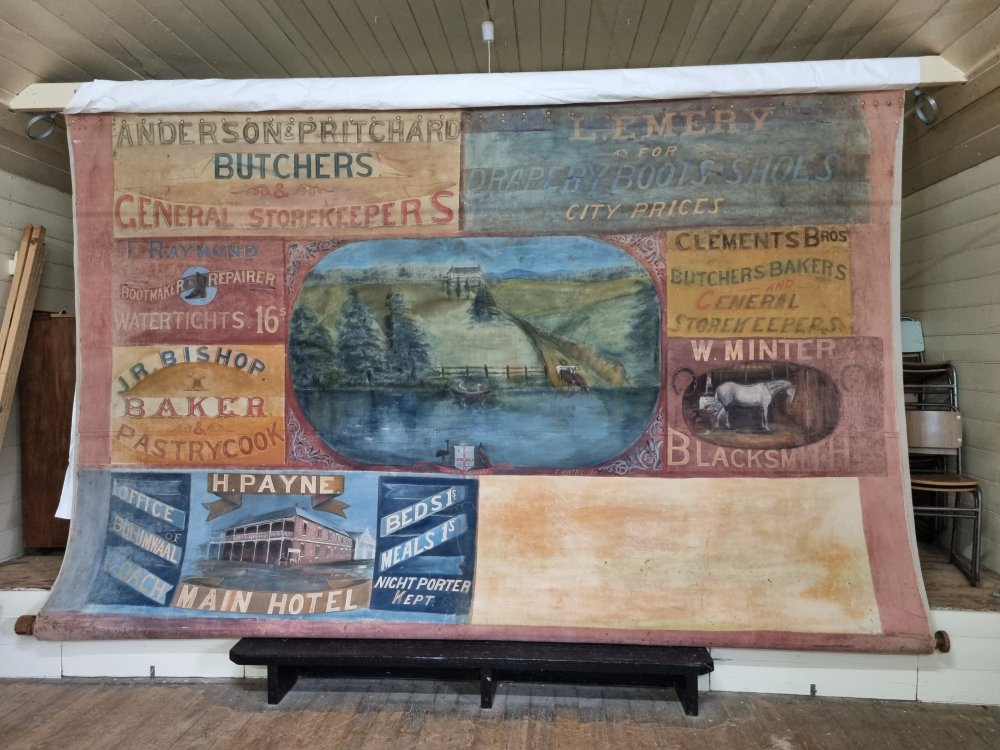 During the past fifteen years or more, the Bullumwaal Mechanics Hall committee has been applying for grants to conserve the stage curtain located in the hall since 1897, without success. The stage curtain had been slowly deteriorating but in the last twenty years or so fading had significantly increased, and signs of wear and tear had become more obvious, threatening the integrity of this unique stage curtain. The stage curtain is still in its original place setting and is one of the only examples left in Victoria and was created during Bullumwaal's heyday in the 1890s.

Following the discovery of gold in the creeks and rivers in the area during the 1850s, the Boggy Creek was extensively prospected and alluvial mining stripped any easily sought-after gold. By the late 1880s and into the 1890s the community was flourishing, with the establishment of substantial quartz mines and several quartz processing batteries operating in and near the township.

With the increased population, social activities were an important part of the community and included cricket and football clubs, sports and picnic days, as well as music and drama clubs. Social dances and fundraising were popular activities, and it is believed that the curtain was created to support just such an event. The curtain was created in 1897, the same year that the township changed its name from Boggy Creek to Bullumwaal, and may well have been linked to this event, as a “Monster Bizarre” and the fund-raising event was documented in the local papers of the time.

Local businesses from Bairnsdale and Bullumwaal appear on the stage curtain and include:

The artist's signature on the curtain is F Winters. These names were revealed during the conversation.

Then in 2020, the Hall committee joined forces with the East Gippsland Historical Society (EGHS), continuing to apply for grants but still without success. Members of the Historical Society were able to connect with Heritage Victoria – Bushfire Recovery when they spoke at an event hosted by Heritage Network East Gippsland in early 2021, and an invitation was extended to Heritage Victoria to come and view the curtain and seek advice on how the Hall Committee and EGHS could move forward on seeking a grant to conserve the curtain.

The visit was well received and generated many conversations, the result being that in August 2021 the Hall Committee received a grant of $20,000 from DELWP, under the Bushfire recovery program.

The Hall Committee was able to engage Paintings Conservator Sabine Cotte and her assistant, Sherryn Vardy, PMAICCM Conservator, Gippsland Heritage Conservation, and arrangements were made to undertake the curtain conservation in March 2022.

The stage curtain conservation has been very successful, bringing to light some hidden treasures, including the revealing of the date the curtain was created - 1897. Members of the Bullumwaal community, Hall committee and EGHS assisted with volunteer labour and equipment to help achieve the project, which was completed in two weeks.

The Bullumwaal Hall Committee would like to extend thanks to DELWP Bushfire Recovery for the grant, Heritage Victoria, and East Gippsland Historical Society for their support. Special thanks to Nadine, Kevin and Di Fleischer, Phil Large, Peter Van Diesen and Jacque Hocking for their time and efforts.

A public open day at the Bullumwaal Mechanics Hall to view the curtain will be arranged for a date later in the year.